Sunnyside was built in the 1920’s by my husband’s parents on an old stone foundation that may have belonged to an estate house. Even then, the many large mahogany trees that surrounded it were perhaps over 100 years old.

In the early 60’s we lived there for 5 years with my mother-in-law. Interest in the garden started in that period. I wanted to get a ‘copper’ – large iron bowl sometimes 8 or more feet in diameter, used on the old estates to water cattle, tramp cocoa. My mother-in-law was against it and told me of a friend who searched for her child one day only to see her body floating in a copper from an upstairs window – that put me off for a while. In those days the belief in things abnormal or old, perhaps African beliefs, were quite strong. I remember asking the children’s nurse who usually worked until after dark why she was now going home earlier, to be told that there was a coffin in the cocoa and she was afraid to pass it after dark since it was open. The season was bad – no rains, and crops were failing so the men needed the sacrifice of a boy child to appease the gods. About two weeks later the coffin disappeared and things went back to normal – I was a little worried since we had two boy children at that time.

My husband and I bought the property in 1972 and came to live there with our four children. The 2 ½ acres had fallen into a very dilapidated state with 10 ft mahogany trees pushing through the wooden floor of the verandah, the lawn a jungle of young mahogany trees and weeds. I remember my brother-in-law saying two months after we moved in, ‘Don’t you think it would be a good idea to get rid of the old wood piled up in front the house?!’ there was no time for gardening then.

In the 70’s there was no lawn mower so Baba, our sometime gardener, would spend three weeks cutlassing the lawn and hillsides, sharpening his cutlass on the flat sandstone and always had a bottle with water nearby to wet it. Insects and animals had a great time in the tall bush – ground lizards, grass snakes, mongoose, scorpions under stones, rats. We didn’t keep any more pigs or chickens after my mother-in-law died but our eldest son loved animals and kept rabbits and guinea pigs.

In 1983, toward the end of Grenada’s experiment in communism, land prices plummeted and we were lucky to acquire another 2 ½ acres adjoining Sunnyside which we call Darlington. After months of clearing vines, bush trees and leveling some areas we found very old cashew nut trees, a Baobab, mangoes including an 80 ft calivigny and more mahoganies. Now we’ve added fish ponds, an area for tortoise and an oriental garden.

My idea of gardening is buying plants that I consider beautiful, taking them home and trying to find a place to put them. How many times have I moved a plant when it becomes obvious that it doesn’t like its home! I planted the Cuban Royal Palm – having no idea it would grow 100 plus feet – over beds of Heliconia that its branches destroy on a regular basis. I’ve put a Ficus Benjamina so close to the Darlington house that it’s Fibrous roots get into the septic tank and soak away and back up the toilets. One day it will threaten the house – but it’s too beautiful to destroy. The soakaway has been replaced by PVC, hopefully it won’t get through that.

In the late 1980’s Sunnyside was rented for two years while we lived across the boundary at Darlington. One day our tenants said the police were enquiring about the cannabis planted on the northern hill slope. Seems that a youngster who had a nice field of marijuana there, fell out with his friend who told the police about it. We had no idea, since the grounds were not cleared at that time.

I got into gardening seriously soon after that. Three gardeners, two full time and an older man of 79, who I tried to retire some years ago but who preferred to potter around and even refused to collect his pension.

Then about 1993, I met the man who would change the way I looked at gardening. Chris Baasch, a landscape artist from Caracas, took on the task of landscaping the 2 ½ acres of Darlington. He laid down hundreds of feet of garden hose, and marked the outline with white paint. I’d fork the beds, adding bagasse – the skin of sugarcane, cow manure, and compost. He’d return in 3 – 4 months bringing truck loads of plants from a local nursery – John Criswick brought in exotic plants from all over the world. Only then did I understand that you found plants to suit the spot instead of buying a plant you liked regardless of whether it would flourish where it was planted.
Chris moved Royal palms already 15 to 20 feet tall, large coconut trees, much to my husband’s horror since we both thought they would die. Today that area is beautifully laid out and I learned a great deal about plants and having the courage to move them when they show they don’t like the spot I’ve chosen for them. There’s no doubt plants have an intelligence. I talk to them occasionally – not when anyone else is around!

About 1995, at the urging of my nephew, the garden was opened to visitors from cruise ships and hotels. Each time I show it and hear the pleasure expressed in the tone of voice and body language of the viewer, I experience great happiness myself. 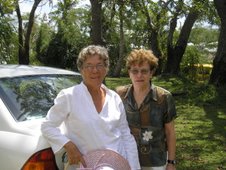 That's me in the white top 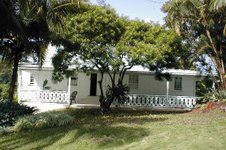 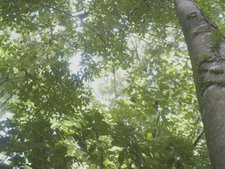 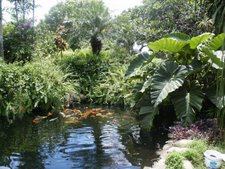 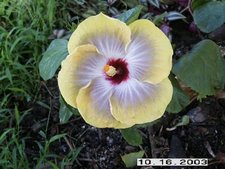